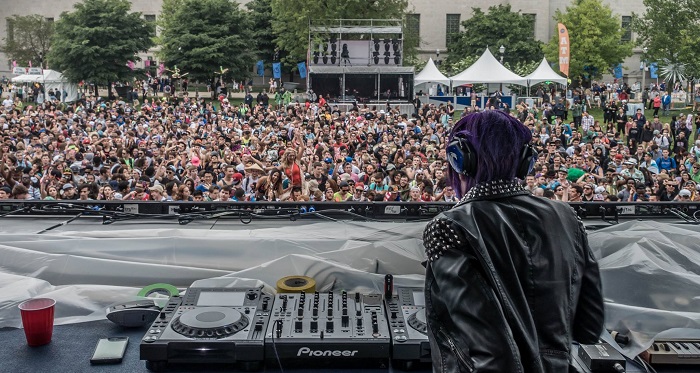 And Dani Deahl is trying to fix all of that. Well, she's doing her best to change the mentality behind that modified childhood rhyme.

The Chicago DJ, producer and journalist is not only capable of creating some of the dirtiest Trap, most adrenaline-injected Progressive House and the most body-jerk-inducing Electro, she's also doing her best to point out the gender inequality in Dance music and the music industry as a whole. She refuses to let an obstacle that she's had to tackle head-on her whole career continue to exist for future generations, so she uses her platform to educate and affect positive change. And she will continue to put out club bangers and raise girls up to equal footing with the boys for as long as it takes.

Dani didn't always have adoring fans chasing her. As a kid, she was bullied from the 3rd grade and generally felt like an outsider. Then in high school, she dated a raver who showed her a world unfamiliar to her. When she finally convinced him to bring her to a party, she was hooked on the Dance culture, despite running into a girl there who was her childhood bully. What really drew her in was the PLUR aspect of the community. The Peace, Love, Unity and Respect shared among what seemed like strangers struck a chord with her to the point that she wanted to teach herself how to DJ. Soon enough, she had her first gig at age 16 "in the middle of nowhere." She may have gotten lost along the way and a little frightened after stepping into an intimidating bar for directions, but she made it to the unique venue:

"I eventually found the place, and it was an abandoned hunting lodge. There were stuffed ducks on the wall and old hunting calendars. I put the first record on and was so nervous I couldn't beatmatch - my hands were shaking and I ran out of record. Here's the amazing part. The crowd knew it was my first show, and instead of booing, they all started cheering and shouting encouragement, so I started the record over again and nailed it."

Growing up in Chicago, it was only a matter of time before she crossed paths with Dance music. As she became more entrenched in the scene, she discovered other female DJs and producers who were kicking ass and taking names. It wasn't until later on that she realized her local scene was the exception to the rule, as Dance music started to cross over into mainstream territory, and journalists started pointing out that she was among the minority. But that didn't stop her from getting into production as well, which she found she was well suited for, balancing her knack for artistic expression and mathematical problem solving. Dani can change colors just like that when it comes to production, releasing Trap, House, Electro and what she likes to call "#Bacon." But she admits that her current work with an indie pop band has been some of the most fun she's had, since it's so different from what she's used to. It's motivated her to pick up some studio skills like mic-ing drum kits and preparing stems for printing once she's done with the project.

The fact that she was a woman forging her own path in Dance music became a real issue when another artist, a man, refused to believe that she had produced her own song even after she showed him the project files on her computer. Things compounded as she faced opposition when she tried to book her own shows. And the grind hasn't gotten easier as she continues to network with club promoters and owners to secure dates:

"Being an artist is a 24 hour job - you make music during the day, you hang out with people at night. Yep, tell your mom that going to hang out at the club or festival is part of your job, because that's the truth!"

On top of producing, DJing and putting her own shows together, Dani added stints as a freelance writer and section editor to her plate.

It started with an artist profile (on her) that she edited herself. She wowed the writing staff and was offered a freelance position. Eventually, she became the Dance music section editor and learned to improve her writing with each piece. In fact, she admits she may even pick up the keyboard again in the future. Her ability to cover hot topics and convey her ideas have proved even more useful as she fights to bring causes she is passionate about to the attention of the masses.

Labeling herself as a equalist instead of a feminist, Dani is the postergirl for leveling the playing field for men and women in the Dance music industry. Just take a look at lineups for major and smaller festivals around the world. How many female DJs are there on average? Just as important, look at the people behind those DJs, like the booking agents, managers, PR representatives and label execs. Realizing that her reputation now precedes her in certain circles, she's using her platform to start and continue the conversation on including more women in the upper echelons of Dance music. And the response has been generally positive:

"It's amazing the messages I get BOTH from men and women who say that I have inspired them, and I screencap and save every single one. There are also amazing dudes that have been vocal - people like Kennedy Jones - and that's so important!"

She's also helped develop the DJ curriculum for a non profit camp called Girls Rock in Chicago, which teaches girls under 10 years old how to set up and use CDJs. And Dani isn't alone in this campaign to raise awareness and make an impact. Recent Vanderbilt alumna, Liz Garard, recently started the #NapGirls movement for others, including Skrillex and Dani, to rally around.

As if Dani doesn't have enough to do on a daily basis, she told us that she has a long list of things she wants to do.

"I've always wanted to write an entire album, write a novel, fly a plane, speak Cantonese (my husband's family is Cantonese and I do want to learn), ugh there's so much...especially since I always just say yes to new experiences."

She's a strong proponent of not knowing what you're capable of until you try, as evidenced in her informative TEDx talk. And she has plenty of inspiration to draw from outside of her personal life, including Amanda Palmer from the Dresden Dolls and Karen O from the Yeah Yeah Yeahs.

"I just love people who are unabashedly themselves without apology."

Dani recently got off her Show Me Your Kitties tour, which helped benefit the Big Cat Rescue non-profit program. When we asked her about the quality and quantity of kitties her fans showed her, she replied with,

"HA! So many people show me pics, and I stayed with one promoter in Orlando who had the most adorable pair of long hair cats - one morning I woke up and one of them was snuggled right next to me. People will share pics of their cats on my Facebook and they even come up to me at parties to talk and show me pics on their phones - I absolutely love it!"

1. What is your favorite movie of all time?Oooooh man I can't pick just one!! Some of my faves: The Princess Bride, The Big Lebowski, Kill Bill (duh), Cube, Oldboy, and I LOVE HORROR MOVIES. I always ask people for Horror recommendations - Lake Mungo, Oculus, The Mist (cheesy dated CGI but oh my god that ending), Funny Games, Sinister, The Descent, The Sacrament, Grave Encounters, I could go on and on. Can't get enough of them.

2. As a young DJ, who was the one DJ you looked up to?A lot of the Chicago DJs I saw on a regular basis - Paul Johnson was a big one - the first record I ever played was a Paul Johnson record. We have such a rich culture here of artists who have changed the course of Dance music - the timeline is ridiculous - everyone from Frankie Knuckles to Flosstradamus. I'm lucky to live in Chicago where there's so much culture and music around me.

3. What is your current set up at home? I have a couple MIDI keyboards (a smaller one and a full 88 key one), a pair of A7X monitors with a Mackie MR10Smk3 sub, Scarlett 18i8 and some other assorted pieces - for DJing it's the full Pioneer 2000 Nexus setup, both CDJs and mixer.

4. What's your favorite record of all time?Oh my gosh another where I don't think I can pick just one… I will say there is one song that will forever mean something to me and that's Modjo's "Lady." It was the first piece of vinyl I ever bought. I got part of the acapella tattooed on the back of my neck, the line that says, 'I feel love for the first time."

Bryan Hahn is all about that #NapGirls life. He's on Twitter: @notupstate.