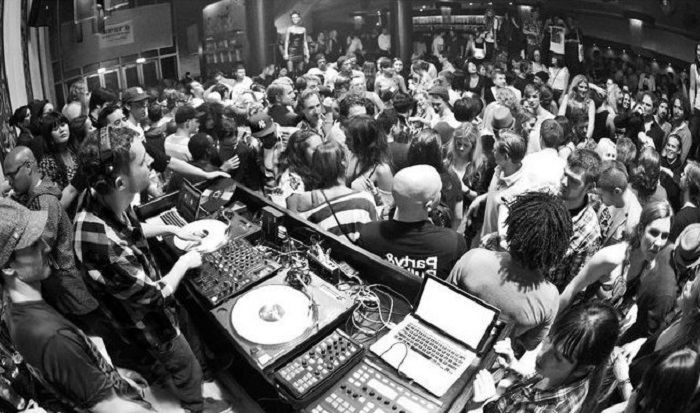 We all strive to live a full life and be content. Unfortunately for many, that only comes close to being fulfilled towards the end of many years. There are a select few who get a headstart ahead of all of us by realizing their dreams early on and acting on them quickly. In that sense, we can all learn a little, or a lot, from DJ Rafik. The German DJ and producer was involved with music from a young age and kept at the instruments, turntables included, that he enjoyed to the point where he is now a 6x world DJ champion, including the DMC World championships. And with his production skills catching up to his DJing abilities, he's got every right to have this on his Facebook page: "Extremely presentable and skilled DJ/producer, articulate, well behaved, well groomed, smelling fantastic 24/7. Babyface of Gold. The list goes on."

World champions have to start somewhere. For Rafik, that was Dusseldorf, Germany. He didn't have much access to music technology, or technology in general, so when he first caught sight of a DJ on a TV show, Housefrau, he started to record it every week. He initially thought that the DJ was producing music right there on the spot. To someone in Rafik's situation, how else could someone be altering music and mixing two records together? So Rafik's early ambition to DJ was actually fueled by a fascination with production. It follows also from his parents, who are both classical musicians. Although he went through formal musical training as a kid and didn't enjoy it, he now feels indebted to his parents for the experience.

But before he got his hands on a pair of turntables, Rafik played drums in a few bands to satisfy his hunger for Metal. His interest in new music didn't stop there. He sought out everything from Hip-Hop to Acid, not just for the music but also for the artists' personalities and sometimes "poor wardrobe choices." Once he decided to try his hand at DJing, local jock DJ Harvey taught him the basics and Rafik quickly found out two things: 1. DJing was not producing and 2: he loved it. When he got his first gig, things didn't go as smoothly as you'd imagine:

"My first DJ gig was in a legendary club called UNIQUE in Dusseldorf, just before I turned 14. It was a gift from the people who taught me and my dad had to come. Some douche got jealous and called the cops on me saying that a child was being violently held at a nightclub. So they came, ended the fun, and nobody would book me until I turned 18. I hope that person got over his instability issues in the meantime [but] maybe he was just smart because in hindsight it was probably good to not spend my youth in clubs."

When he did turn 18, Rafik finally got a mixer that had a fader curve, the Vestax PMC 07. He was also running with a crew of DJs called the Lords of Fitness who were quickly making a name for themselves as the crew to beat. They formed around the simple fact that the individual members were winning tournaments on their own, so they came together to form a super squad. Friendly competition amongst the group pushed them all forward "They are like my family when it comes to DJing. Like with my parents, I credit 80% of my DJ skill to LOF because they opened my eyes whenever I was on a weird path."

After winning enough tournaments with LOF, Rafik would enter the DMC's a few times until he won the whole thing in 2007. That wouldn't be the last of his titles either. His scratches are fluid and his musicianship comes through in his beat juggles as he flawlessly creates a new beat from two old ones on the spot. He plays two turntables like they were two instruments in a band. This knack for creating music with what he has available would carry over into the start of his production career as well. When we asked Rafik for his thoughts on the DMC's and its ability to keep up with the times of technology, he replied:

"Personally I think with the new technology, we take a distance from 'turntablism' and merely incorporate it as one skill to draw from for a modern 'DJ performance.' But the DMC is something else. I don't wanna front but it feels like people just show up there now to grab a free title and for supporters to talk all that #RealDJING-bullshit. I feel it's cool to leave DMC just the same as it was in 85/86 and look at Thre3style for all the new crap. Thre3style is about DJing, not necessarily turntablism."

As a battle DJ, he's learned to find a silver lining in his failures. Instead of complaining, Rafik has studied his mistakes, worked on never repeating them again, and prepared for new obstacles. He also lives for that rewarding feeling when you come back from a loss only to win even harder. That's the attitude that makes a Craze or a Kentaro, two DJs whose routines Rafik has grown fond of: "DJ Craze is a bad motherf... Any Craze routine is an instant favorite. Also Kentaro was on some mind bending stuff in 2002. Good example of the whole 'minimal' idea, when he pulled out a 'Gag Seal,' I thought it will be so boring, but then he flips it HARD and it's the dopest thing you could imagine. He pulls endless stuff out of a beat that seems to offer nothing. I still don't know how he did that and nobody has ever sounded like that except him. Legend."

As a producer, he had to rely on his diligence and Youtube for a crash course: "If you make wise judgement calls and filter out the bullcrap, you can get starter information for anything off YouTube. I might bake a fucking Chocolate soufflé today and guess where I'm headed?" While it's difficult to classify his sound (he even has trouble defining it), it's fun try. Certain tracks have a heavy focus on the percussion, which makes sense considering his short lived drum career. Others allow the melodies to shine through, which are often chopped into staccato phrasings and extended chords. From his angle, he's just trying to create simple perfection:

"It's my fascination at the moment. Anything I do, I go hard technical - that's cool but there's more to it. I think minimalism is the king discipline. Someone at Apple once said, 'Perfection is when you can neither add nor take anything away from a product.' That resonates heavily with me since I always tended to stack shit and make it sound big. My beats are not minimal (yet). A good example for a simple track is maybe James Blake's 'Limit to Your Love.' But also many Daft Punk songs - they sound huge because they used a huge sample. They added literally 2 things and that was all they needed. The songs are actually not so minimalistic, but the production process was still on the 'less is more' tip. Oh shit... TNGHT - 'Higher Ground.' They made the biggest record of the year in what, 3 hours? That's SICK."

We can't wait to see what perfection looks like from you, Rafik.

3. As a DJ, what's your biggest pet peeve?Perfectionism. It's a weakness. Make no mistake.