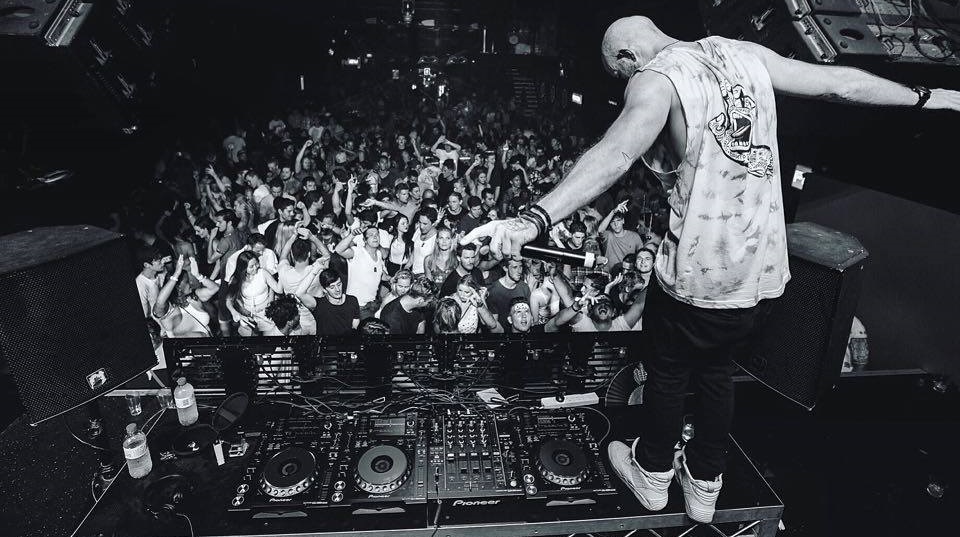 What's in a name? That question, originally posed by Juliet to her lover Romeo many years ago, is a very relevant question today regarding genres in music. It's become commonplace for someone to be a fan of Metal and Dubstep or Jazz and House. What's more interesting is discovering how people become fans of such divergent genres. Kronic's story is no exception. Originally a student of Hip-Hop, Kronic found that Dance music also fit his creative vision. After a few singles took off, he found himself in high demand in the Dance world. He's come to embrace the position of having one foot in Hip-Hop and one foot in Dance by creating his own genre, sophisticated ignorance. So get your champagne glass and stack of singles handy, because this rowdy Aussie doesn't disappoint.

Kronic grew up in Adelaide, Australia, home to respected DJs like Dirty South, TV Rock, and Tommy Trash. Although his parents put him onto AC/DC at an early age, he found his true home with Hip-Hop once he got to high school. Mixtapes from DJ Rectangle, Peter Gunz, and Moto were the soundtrack to his days of chasing girls and late night drinking. They also got him into DJing:

"I was obsessed over the way they would blend party records, add cuts, and flip lines like a battle DJ. That influenced my whole style. I chose the name ‘Kronic' because there were so many classic 'chronic' samples I could flip into mixtape."

He took the money from his job driving forklifts ("That shit sucked. I’m not going back,") and then went straight to the record shop to buy vinyl for house parties he would DJ. While his sets were primarily Hip-Hop, he started to add more Dance music and mashups around 2007. This is mostly due to the first festival he ever attended, where Chuckie was scratching Dance music with Hip-Hop. Seeing 20,000 people rock with that combination inspired Kronic to experiment with the same ingredients.

By this time, Kronic was also recording his own mixtapes and uploading them to Myspace. Although he originally recorded his mixes off of vinyl, he moved into Ableton and while he was laying out tracks, would get ideas on producing his own music. These blueprints for songs in his head in conjunction with becoming more of an open format DJ and noticing established Dance artists produced their own music, Kronic moved into the production side of things. As his mixes started to take off, he was getting booked and rebooked across Australia. Although these were glorious times, he was getting by just enough to buy some new records. Around 2010, he moved to the Gold Coast where he had a residency that gave him the opportunity to truly develop his open format sound.

With more time to work on original production, Kronic eventually ran into the "ARIA nominated, multi-platinum selling bad role models" Bombs Away. The record label signed him as their first act. Things started to snowball from there and Ministry of Sound's Soapbox Agency signed him soon after. A few years and singles later, he worked on "Hey Ho" with Krunk as a label supported free download. Ultra Records saw its rapidly growing popularity and signed it for North America. Soon, Kronic had a #1 hit on iTunes and Beatport. He then took the independent route of starting his own label, Sup Girl, to have full control of his releases and help other upcoming artists. While his collaborations ("Vamonos" & "Turn Up The Club") are released on other labels to maximize the exposure to potential fanbases, he enjoys having the final say on his own releases, "from artwork, to remixes, to release dates."

Looking at his catalog, Kronic's brand of sophisticated ignorance comes into focus. He's been able to marry his Hip-Hop roots into Dance music by working with genre crossover friendly artists like Lil Jon and Far East Movement. To him, it's a mix of "epic, intricate, aggressive, and electronic soundscapes with Hip-Hop music." For example, on "Hey Ho," the original vocal sample is the classic Hip-Hop call and response a DJ or emcee would start at a show. Expect more Hip-Hop oriented releases in the near future:

"I come from Hip-Hop. Making records at lower tempos actually feels far more natural to me. Writing main stage Dance music is great and I’ve had a lot of fun doing that, but I don’t really sit around listening to 128 BPM festival records in my apartment these days. I guess I’ve been starting to feel like I’ve overstayed my welcome in Dance music a little, and my production focus has gradually shifted to reflect that. I’m really just a Hip-Hop guy that found himself on Dance music stages, and between all of that, my sound kind of makes more sense to me than anything else right now."

From driving forklifts to joining Whoo Kid's Shadyville DJs and having fans in Japan sing along with his music in uniforms made just for a live show, Kronic has come a long way. But there's still much to be done. He wants his music to impact people outside of the clubs as well as win a Grammy. While he considers DJing and producing a life long learning experience, his chances of fulfilling those goals soon don't sound far fetched. Until then, he'll be following some much needed advice that applies to himself as well as new artists:

"Make music that stands out. In order to be noticed amongst the sea of Electronic music being shoved down everyone’s throat, you have to make music that’s worth talking about. Like, don’t try and make Bounce or Tropical or whatever because it’s hot right now. Try and craft your own sound. I often wish that I started production much earlier, but I guess the amount of time I spent focused purely on DJing has influenced my production style, and made my music unique. I was really unsure of a lot of my earlier work, and it held me back from taking a lot of early opportunities presented to me."

We're happy to report that nothing is holding him back now and we're looking forward to the next step in Kronic's musical journey.

1. What is your favorite movie of all time?Goodfellas

2. As a young DJ, who was the one DJ you looked up to?DJ Rectangle

3. As a DJ, what's your biggest pet peeve?DJs who think they are better than the crowd.

4. What is your current set up at home?DJ set up: A pair of Technics 1200’s and a Pioneer mixer. I don’t really use them much at home, outside of production, but once I move out of an apartment I’d like to throw a few house parties with them.
Production set up: Minimal - It’s really just my laptop, some monitors, and a MIDI keyboard. I’ve got a mic so I can demo toplines too, but other than that, it’s all in the box.

5. What's your favorite record of all time?Snoop Dogg - "Ain’t No Fun"