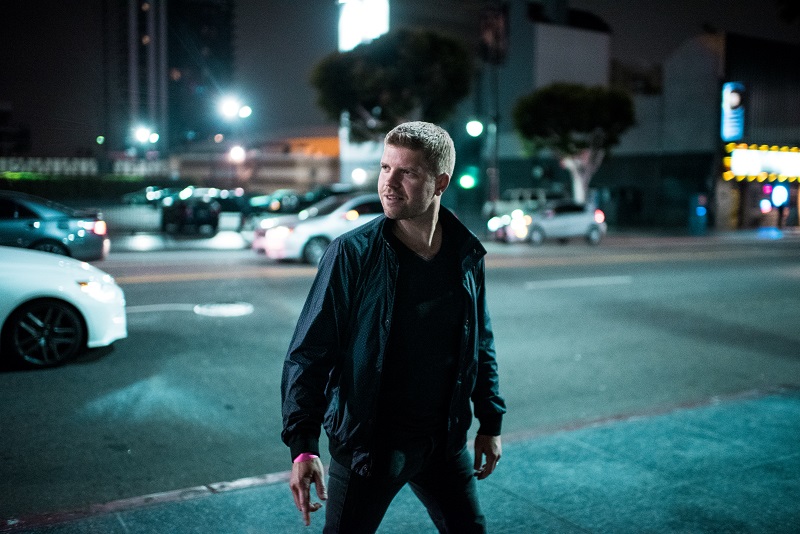 Morgan Page is one of the biggest names on the dance scene right now. He’s been a resident DJ in Vegas, been nominated for a Grammy and has his own weekly radio show. In his live shows, he loves to utilize 3D and other immersive technologies. He’s also one of the greenest DJs out there, with his own solar powered studio, and a Tesla. Page is back with Don’t Give Up. It’s another collaboration with the singer-songwriter Lissie, who he has achieved great things with in the past.

Don’t Give Up is built for the dance floor, but with atmosphere and depth that rewards repeated listening. The verse is quieter, with acoustic guitars and pianos setting the tone. However, rushing synths and drums signal the chorus, Lissie’s voice rises up an octave and you can feel your own hands hitting the air.

As Morgan Page drops his new single, Digital DJ Pool took the opportunity to catch up.

We’re loving the new track Don’t Give Up. It’s another terrific collaboration with Lissie. What keeps you coming back to working with Lissie?

Lissie just has that voice that grabs you and never lets go. It's got sawdust, a bit of grit that really conveys emotion, and we always seem to get great results.

Tell us about Don’t Give Up. What is the message that you’re putting across?

A big part of the song is about having the faith to keep pushing in a relationship and overcome those everyday obstacles you encounter. Every good relationship has its share of conflict and resolution.

You present a weekly radio show on Sirius. We love your natural presenting style! How does your show help with the other things you do, like DJing and production?

The show is always inspiring because it focuses on the best new music on the week, so it gives me ideas for music, but also a great platform to unveil my new songs as well.

You’re famous for your boundary-pushing live shows, which incorporate the latest tech like immersive 3D. What have you got planned for the future to keep wowing the crowds?

I'm heavily involved with virtual reality. It may not involve the live shows, but keep an eye out for an Oculus experience coming very soon! Eventually I'm looking to integrate some of these elements with the show, but for now they will be downloadable experiences that complement the music releases.

You’ve toured and collaborated with some of the music’s biggest innovators, like BT. Is there anyone you haven’t worked with yet, who you are really itching to?

I think the most exciting talents are the new guys, the names that people wouldn't recognize - super talented producers that have no ego or expectations. In terms of marquee names, Kaskade and I have discussed meeting up and talking music but it's never happened. Someday!

What's next for you on the journey? Is there a new album on the way?

More of a focus on singles with albums taking less of a priority. It just takes too long to write and set up an album, and most of the songs get overlooked. I probably won't stop albums, but they will be secondary to singles. I’m excited to be on a new label (Armada) and pushing genres with the new sounds I've been working on.

Do you have any advice for anyone starting out in the industry?

Build a following slowly and organically, rather than the shotgun approach. Use your friends to "workshop" your music and provide positive, constructive criticism. Make sure to check out my site for producers: http://mpquicktips.com. It’s free, and compiles my 15 years of experience into simple tips and blog posts. Also: http://twitter.com/mpquicktips.

Finally, your new track is Don’t Give Up. Is there anything you gave up, that you wish you’d persevered with?

I'm grateful for the path I've taken, although I kinda wish I'd spent some more time learning instruments like guitar. I took piano instead, which paid off.