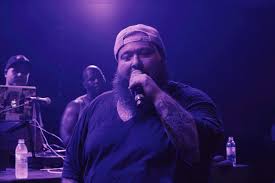 Arian Asllani, better known by the stage name Action Bronson, is an American rapper and former chef. In August 2012, he signed to Warner Bros. Records, but was later moved to Atlantic Records' imprint, Vice Records.

Gangrene is back. The duo of Oh No and The Alchemist are about to put out another album, 'You Disgust Me,' and their latest single is all about being the man. Who better to feature on the track than Action Bronson? The two producers trade verses after Bam Bam spits his, letting...
Read more...