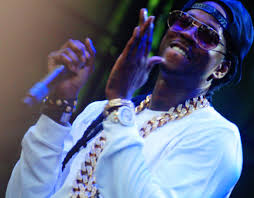 Tauheed Epps, better known by his stage name 2 Chainz, is an American rapper from College Park, Georgia. He initially gained recognition for being one-half of the Southern hip hop duo Playaz Circle, alongside his longtime friend and fellow rapper, Earl "Dolla Boy" Conyers.