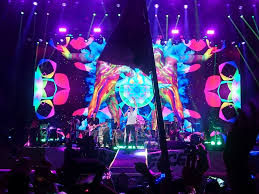 Coldplay has been able to produce some great songs of epic proportions. The sound that they capture in their music is often larger than life and could be the soundtrack to a movie that would win an Oscar. "Adventure...
Read more...

Everybody wants an adventure of a lifetime, whether they know it or not. And sometimes they go to the clubs to get a glimpse of one. Coldplay tried to share some of that fun with their fans by putting out the easy going and danceable single last year. The Portuguese producers puts a little more swing...
Read more...