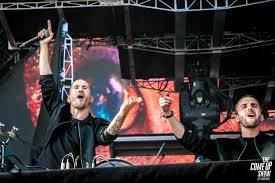 Galantis is a Swedish electronic dance music production, songwriting and DJ duo consisting of Christian Karlsson and Linus Eklöw. Karlsson is also known as Bloodshy as part of two other musical groups, a duo and a trio. Eklöw is known as Style of Eye. They are best known for their 2014 single "Runaway" and 2016 single "No Money". They have worked with The Sea Fox for many of their music videos, including the official video for "Runaway". The Sea Fox has also been featured on many of their album and EP covers.

Galantis' global smash gets a quircky re-rub from TILTED. Just as the name and logo suggest, the remix is a bit off-kilter, and we like that.
Read more...