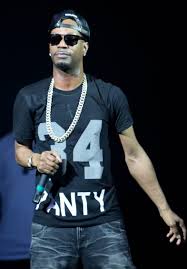 Jordan Michael Houston, better known by his stage name Juicy J, is an American rapper, songwriter and record producer from Memphis, Tennessee. He is a founding member of the Southern hip hop group Three 6 Mafia, established in 1991. In 2002, he released his solo debut album Chronicles of the Juice Man, in between Three 6 Mafia projects.