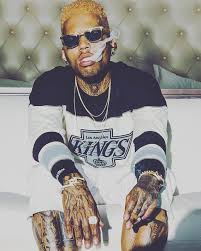 Brian Todd Collins, known professionally as Kid Ink, is an American rapper born and raised in Los Angeles, California. He is signed to RCA Records.

If there is anybody out there who should know what makes a crowd move it's the the legendary DJ Jam. His CV reads like a fairytale of performances with the icons of West Coast Hip-Hop. Dr Dre, Snoop Dogg, Warren G, Nate Dogg and many others trusted their sound for the biggest tours in the history of...
Read more...

The La Leakers are part of the handful of DJs who are keeping the mixtape culture alive and well in Hip-Hop. They plan on releasing yet another project of exclusive music from some of the hottest artists out right now and this single is first up. The original track was half a step away from becoming...
Read more...

By now, we know it's only cool to keep it 100, so it stands to reason that Ty Dolla Sign, Tyga, Kid Ink and Iamsu are all about that life. Well known for his work with Blink-182, Travis Barker's a fixture in the rap scene as well, so can we assume he does the same. In fact, with...
Read more...