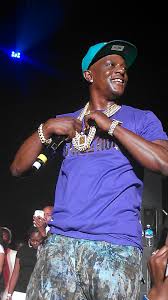 Torrence Hatch, better known by his stage name Boosie Badazz, formerly Lil Boosie, is an American rapper from Baton Rouge, Louisiana. Hatch was bestowed the nickname Boosie by his family, and he was raised in Southside Baton Rouge.

Some things are certain in life: death, taxes, and haters. When you're faced with a hater, there really isn't much to do other than shrug them off. For Hot Boy Turk, he just makes a sound in disgust and keeps it moving.
Read more...