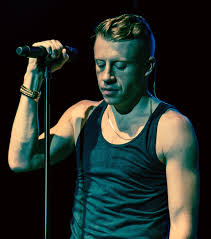 Ben Haggerty, known by his stage name Macklemore and formerly Professor Macklemore, is an American hip hop recording artist from Seattle, Washington. His stage name originated from his childhood; it was the name of his made-up superhero. Since 2000, he has independently released one mixtape, three EPs, and four albums. He has significantly collaborated with producer Ryan Lewis as Macklemore & Ryan Lewis. Macklemore and Ryan Lewis's single "Thrift Shop" reached number one on the US Billboard Hot 100 in 2013.