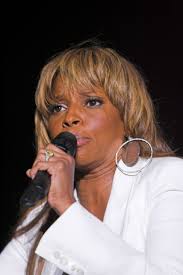 Mary Jane Blige is an American singer, songwriter, model, record producer and actress. Starting her career as a background singer on Uptown Records in 1989, Blige released her first album, What's the 411?, in 1992, and has released 12 studio albums since and made over 150 guest appearances on other albums and soundtracks.