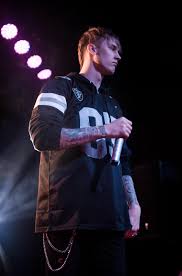 Richard Colson Baker, better known by his stage names MGK and Machine Gun Kelly, is an American rapper and actor, from Cleveland, Ohio. MGK embarked on a musical career as a teenager, releasing a mixtape in 2006. He would then go on to release four further mixtapes that garnered him nationwide attention by 2010. MGK then secured a recording contract with Bad Boy and Interscope Records in 2011. His major label debut album, Lace Up, was released in October 2012 to critical success.