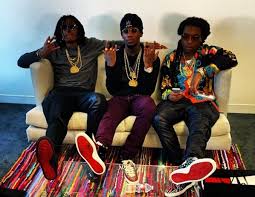 Migos is a hip hop trio based in Atlanta, Georgia. The group consists of Quavo, Takeoff and Offset. Quavo is Takeoff's uncle and Offset is Quavo's cousin.

A shape shifting, frenetic track that stops you in your tracks.
Read more...

Still Got it by Usher ft. Migos - Fallsteeze Remix

A few years back the art of combining hip-hop and electronic music became acceptable on a large scale. But nobody could have imagined the tidal wave of creativity that would ensue as a result of the blurring genre landscape. One of our favorite new artists spawned from this futuristic form is Fallst...
Read more...

There's a lot of hate going on in the world--in real life and online. And a lot of it is unwarranted for various reasons. That's why today's single from Devin Hill should be the new song for the haters to meditate with.
Read more...

Now that Jeremih finally released his album, the world can rest easy with new songs to fall asleep to, and make babies to, every night. His new album is filled with what we feel like R&B should sound like in 2015. This stand out track features Migos and a smoky, slowed down Trap beat. What pushes......
Read more...

The mad producer Timbaland is preparing a new album, Opera Noir, and so far it sounds like a mix of mainstream beats as well as his genre bending innovation. The latest single from the album that features Atlanta's Migos fits into the former classification. The beat uses bouncy, almost insect...
Read more...

Migos and the GS9 boys will combine forces like Voltron to form Shmigo Gang this year. Together, they will terrorize parents' dreams and dominate the streets. The first release from their upcoming mixtape features Migos going in over a beat from the GS9...
Read more...