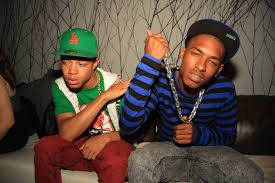 The New Boyz was an American jerkin' crew duo that consisted of rappers Earl "Ben J" Benjamin and Dominic "Legacy" Thomas. They debuted in summer 2009 with their viral hit, "You're a Jerk", taken from their debut studio album Skinny Jeanz and a Mic, released in September 2009.