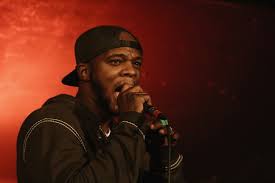 Shamele Mackie, better known by his stage name Papoose /pæˈpuːs/, is an American rapper and songwriter. After breaking into the rap game in 2005 with DJ Kayslay with the release of his song "Alphabetical Slaughter" he signed a $1.5 million contract with Jive Records.

Papoose is New York, through and through. That means that he'll never back down in a fight, he won't snitch, and he can also show a sensitive side when it comes to his lady--Remy Ma. Since he recently got married to his long time girlfriend...
Read more...

Papoose is old school. And that means that he'll settle any issues in person, not on social media. The New York City emcee wants to make that clear on his new single from his upcoming project. Ron Browz, of "Pop Champagne" fame, lays down some muffled...
Read more...