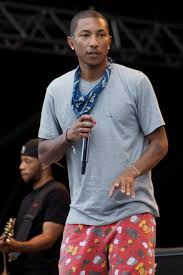 Pharrell Lanscilo Williams is an American singer, a rapper, and a record producer. Williams and Chad Hugo make up the record production duo the Neptunes, producing soul, hip hop and R&B music.

Missy Elliott re-emerged onto the scene when she made a cameo at the Super Bowl halftime show and now she's back with new music. She recently released this new single with a video and it's safe to say that she hasn't missed a step. The song is produced by Pharrell and has a minimal Dance...
Read more...