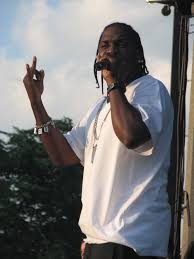 Terrence LeVarr Thornton, better known by his stage name Pusha T, is an American hip hop recording artist. He initially gained major recognition as one-half of hip hop duo Clipse, alongside his brother Gene "No Malice" Thornton, with whom he founded Re-Up Records.

Not long after being named the President of G.O.O.D. Music, Pusha T releases this new single. It samples Biggie's "Think BIG" for the hook and Pusha uses that theme to the fullest over the eerie Timbaland production. As the title gives away, this one is full of brag raps. You can almost consider it ...
Read more...

Pusha T has been experimenting with Dance music for a while so this collaboration with Axwell & Ingrosso shouldn't come as a surprise. The beat that the DJ duo lay down sounds like a royal procession for a kingdom ruled by a biker gang. It's regal yet rebellious. It's also filled with some altered v...
Read more...