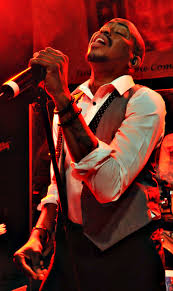 Raheem DeVaughn is an American singer and songwriter. His debut album, The Love Experience, reached No. 46 on the US Billboard 200 album chart. It featured the singles "Guess Who Loves You More" and "You". His second album Love Behind the Melody was released in January 2008. It features the singles "Woman", and "Customer". DeVaughn was nominated for Best Male R&B Vocal Performance at the 2008 Grammy Awards for the single "Woman". In 2015, he had released his fifth album, Love Sex Passion.