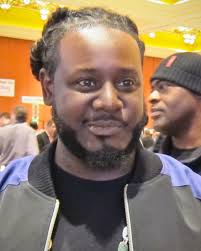 Faheem Rashad Najm, better known by his stage name T-Pain, is an American rapper, singer, songwriter and record producer from Tallahassee, Florida. His debut album, Rappa Ternt Sanga, was released in 2005. In 2007, T-Pain released his second album Epiphany, which reached number one on the US Billboard 200 chart. His third album, Thr33 Ringz, was released in 2008.

With everyone becoming buddy buddy in the Hip-Hop world and working on collaborations left and right, it was only a matter of time before we got a supercut like this one. DJ Montay and DJ Jelly enlist The Dream, T Pain, and Twista for a smooth bedroom theme song that will also turn heads...
Read more...

T Pain doesn't need auto-tune to prove that he can sing. But then again, when it comes to a party song, why not? For the first single off his upcoming 'Stoicville: The Phoenix' album, the Florida native gets the king of the clubs, Juicy J, as well as DJ Mustard on the beat. The...
Read more...