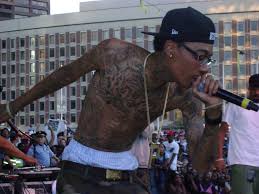 Cameron Jibril Thomaz, better known by his stage name Wiz Khalifa, is an American rapper, songwriter, and actor. He released his debut album, Show and Prove, in 2006, and signed to Warner Bros. Records in 2007.

In a world seemingly gone wild with division, we all need moments that remind us how we can come together. 'Sucker For Pain' is just such a moment, combining both elements of Hip-hop and modern day Rock swooning for a chill jam that's united in it's message.
Read more...